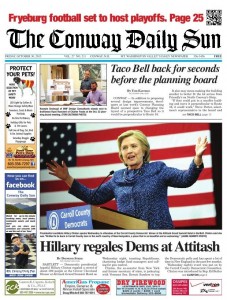 We had a tremendous turnout for the 2015 Grover Cleveland Dinner at the Attitash Grand Summit Hotel in Bartlett NH.  Well over 275 Democrats from across Carroll County and the country came to hear Hillary Clinton lay out her vision for the future of the United States.  We’d like to thank the Clinton campaign and the hotel staff for helping put together an amazing evening for all in attendance as well as Colin Van Ostern, Mike Cryans, Shawn O’Connor, Carol Shea-Porter,  NH State Senator Jeff Woodburn and Bill Shaheen for attending and delivering inspiring words for local activists.

We’d also like to congratulate Bonnie and Gary Chehames of Tuftonboro for winning the 2015 Dorothy Solomon Award for providing hard work and leadership in building and maintaining an active Carroll County Democratic organization.  Additionally, we presented two Wellstone Awards for individuals who promoted the ideals of justice and progressive policies for the people of Carroll County and the state of New Hampshire.  The 2015 Wellstone Awards went to Representatice Susan Ticehurst of Tamworth and Dick Pollock of North Conway.